The first part of my vacation was spent visiting my little sister in Atlanta. She lives in a very nice area, in a very upscale neighborhood, in a beautiful home. Her home is near the neighborhood park that extends to the river and is a undeveloped tract of land. It is a mix of grasses and woods making it a delightful area to walk. As we walked the path, her dog Beau surged ahead and lagged behind depending on what scents he discovered. There were some deer that watched us warily. The air was full of bird song and the sound of an early morning frog chorus. As we walked our steps were accented by the rustling of dried leaves and the soft crunch of loose rock. There had been a big storm the day before and the path was littered with a variety of debris from the trees – twigs and leaves and the occasional seed pod from the magnolias. We were talking and laughing while we enjoyed the stroll. And then we reached the limit of the park. My sister guided us beyond the boundary of the park and we broke the law. We trespassed onto private property and into the bamboo forest. As we stepped into the bamboo, the silence fell around us. There was no bird song. There was only a stillness. Looking ahead there was only the green and brown of the bamboo. 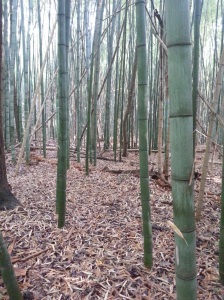 Looking up made me feel so small in that tall forest. 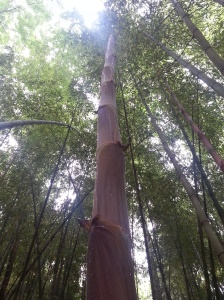 As we wandered, the leaves carpeting the ground absorbed all sounds. We fell silent. It was both beautiful and eerily quiet. The storm had caused some damage either from the wind or possibly the lightening. There were some bamboo that had been split but was still standing. The interior reminded me of small school lockers waiting for books and backpacks. 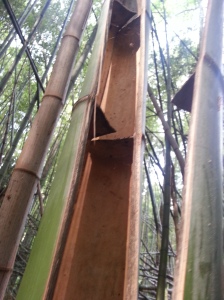 We lingered in that muted forest enjoying the solitude and seclusion. I noticed that there were some inhabitants and we steered clear. Hoping that they were either dormant or had abandoned the hive. 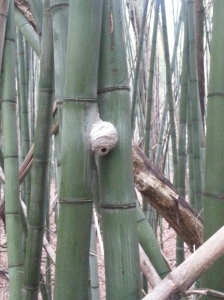 As we departed, I left nothing behind but a single hand print in the dew.

The bamboo forest however left something in me – a sense of peace and solitude that is not loneliness.