As I mentioned, I got a Roomba for Christmas. I’m really enamored with the little guy. Since it is my robot I decide to give it a name. After much deliberation I chose MO. MO is short for Microorganism Obliterater, a cleaning robot from the movie “Wall-E”. MO is single minded in his mission to get rid of all “foreign contaminants” as is the Roomba. 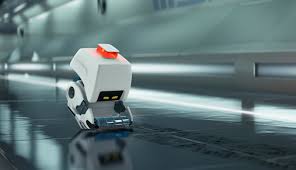 I named it MO before I ever heard it speak. In fact I had no idea that it talked. MO says things like “Please recharge Roomba” or “Roomba cannot return to the Home Base” and even “Move Roomba to a new location then press CLEAN to restart.” It is a good name even if MO has a female voice.

Sparky on the other hand calls my Roomba “Chappie” and refuses to call it MO! I cannot and will not call him “Chappie” for several reasons:
1. I have a friend whose husband’s nickname is Chappy.
2. We have relatives with the last name of Chapman and I think it is rude to name it Chappie.
3. I don’t want a robot named after a turkey of a film of the same name about a reprogrammed sentient police robot raised by gangsters…
4. It is my robot and I should be able to name it.

OK so I have a thing about names. I do believe in the power of a name (see my story about Merit V. Bidwell). There is control over things we name. If you can name a fear it is diminished. If you can name an enemy you are that much closer to vanquishing them. And if you name someone, even a nickname, you can influence their interactions with others. Which brings me to the IU South Bend magazine. They were featuring students who were firsts in their family to graduate from college. It was sad. One nice looking young man was named “E-Lexus”! How awful is that? On the next page was an earnest boy with the name “Echo”. I read his name and mentally screamed why?!?! In my job I see lots of strange names. It makes me gasp when I see names like Armani, Allyesunn, Gifty, Revell, and Yersinia (no, these are not international students with ethnic names). I nearly fell out of my chair with that last one. I suppose if you are not in the medical field it isn’t too bad but the causative agent for Black Plague is Yersinia pestis! Heaven help us. Speaking of which, my niece has a step daughter named Nevaeh (neh vie eh) which is heaven spelled backwards. I wonder what possessed these parents to give their children such odd and potentially scarring monikers.

OK, I have now stepped down from the soap box and am headed to work where I will ponder what Moon Unit Zappa thinks of her name and what her friends call her…

14 thoughts on “Looking for a Name”