So We have had a little (understatement) excitement. Or should I call it catastrophe? Maybe disaster is a better descriptor. Any way you look at it, it was traumatic.

Sparky got a phone call at about 6:40 AM Wednesday. It was son#1 calling in a bit of panic. Well, maybe not exactly panic, it was more a state of shock and confusion. He had been awakened by a tremendous boom. The whole house seemed to shake and he thought (for an instant having been awakened from a sound sleep) that it was raining glass. Fortunately there was no glass. Unfortunately he had plaster chips raining on to his bed. At this point I have to make it clear we do NOT live in an area prone to earthquakes. By the time he had gathered his wits and his clothes, there was a pounding on the door and shouting that a car had just run into the house.

Yep. Some 30 year old had swerved first onto the lawn of the high school across the street from the boy’s house, and then veered across the road, up the curb, past the sidewalk, up the embankment, smacked the fence and rammed the house. He was unconsciousness and unresponsive. The first responders administered Narcan and he was transported to the hospital in serious condition. The house suffered serious damage as well. The car had to have been travelling at an excessive speed.

I had to go to work but Sparky went to the boy’s house lickity split. It was bad. Very bad. But it could have been worse.

Son#1 was sleeping on the other side of the room from where the car hit. He was shook up but uninjured. The fence, which is still half standing for now, slowed the car a touch so that it didn’t take out the whole wall. The driver is still alive. He missed the pedestrian walk signal, the light pole, the telephone pole, the fire hydrant, and ALL THE TREES. If he had hit the tree he probably would have been killed by the accident. As it is, if he dies it will be due to drug overdose…
If you want to read the news story and watch the hour long video of mostly police lights it is available on line at:
https://wsbt.com/news/local/breaking-car-crashes-into-building-on-lincolnway-east
So here are some of the photos: 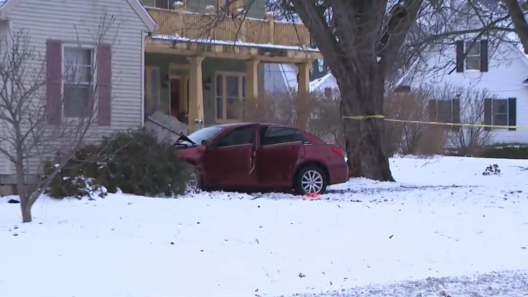 The pictures above are of the outside of the house.

The red is the bottom of the bumper of the car as seen from the basement. 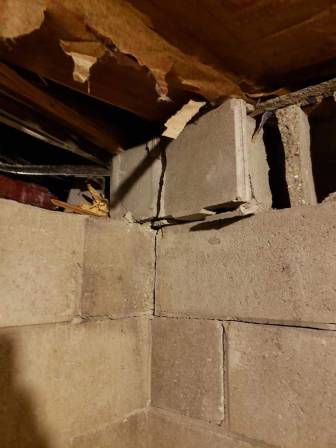 The photos above show the damage to the foundation. The entire front of the house was shifted. The pictures in the basement are the 2 opposite corners showing the displacement of the cement blocks. It is too early to tell but I think there are some major cracks in the basement walls which will result in some significant water leaking once we get a thaw! 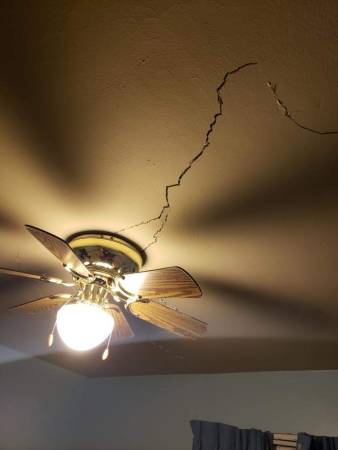 These are the ceiling and wall cracks in son#1’s bedroom and the living room… not a fun thing to contemplate.

36 thoughts on “Looking at the Foundation”