First up was a panic meal. I was pressed to make a dinner and there wasn’t much in the house. I threw together an interesting pasta meal consisting of spaghetti made of brown rice and quinoa. Supposedly gluten free and vegan and oh so good for you. I like my gluten. The taste wasn’t horrible but the texture is “toothsome” – you cook it and there is a very fine line between chewy and completely spongy/slimy. The pantry contained a jar of Vodka Sauce from the discount store (an off-brand that looked a bit too red orange). I happened to have some broccoli, green olives and a few frozen shrimp. I thawed, heated, sliced and combined the whole works into a delightful meal topped with shredded Parmesan cheese.

My second experiment was a few weeks later. I had had Lebanese Rice a long time ago (before children) and had gotten the recipe but never made it. There were some items languishing in the pantry and I figured I’d give this dish a try Lebanese Rice aka Hashweh.
Ingredients
1 lb. ground beef (the leaner the better)
1/2 an onion diced (or 3 T. dehydrated chopped onion)
1 t. Allspice
2 cloves crushed garlic (or 1/2 t. garlic powder)
1 t. ground cloves
1 t. cinnamon or cardamom (I have both so used a 1/2 t. of each)
1 t. salt
1 t. pepper
Brown the meat and drain the grease. Add all the above ingredients plus 1/3 c. water. Stir to allow the spices to coat the meat and cook until the water is gone. Stir in 1/3 c. golden raisins and 1/3 c. pistachios or pine nuts to the meat.

Make 2 cups of rice (according to the usual directions) adding 3 T. dried parsley or 1/2 c. fresh chopped parsley as it cooks. Once the rice is done combine the meat and rice. Turn it out onto a large serving tray or bowl. Top with 1/3 c. slivered almonds and additional chopped parsley (which I ran out of). 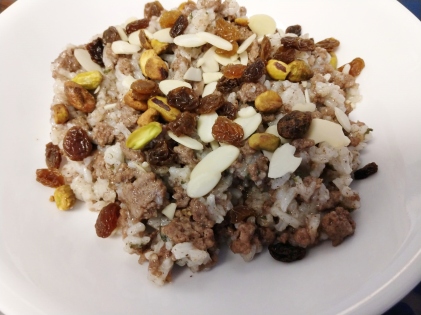 Because Sparky is not a fan of the raisin, I added the raisins to the top of mine and used dried cranberries for his. The above is the picture of my serving since he tucked into his before I could take a photo!!
This was so good that just the other day Sparky wanted to know if I was going to make it again anytime soon. He rarely asks for a particular meal so he must have really liked it!!

16 thoughts on “Looking in the Kitchen”