I wanted to have a wind chime. The gentle sound on the breeze during the summer is soothing and signals “home”. Since the ceramics studio is closed, and the prospect of getting in for a class is now been narrowed to “next to impossible”, I decided that a homemade one was just not feasible. I’m not eliminating the possibility however when I do try another one the design will be a little different.

About 25 years ago Sparky’s sister gifted me with a metal wind chime. It is small with the four chimes ranging from 3 – 6 inches long. It makes a high pitched tinkling sound. It still resides on the porch but doesn’t make much noise. I’ve always liked the large resonant chimes but the cost has always been out of my budget. And by that I mean that they’ve been hundreds of dollars. When shopping for some solar lights for a project I ventured into a store that I just don’t frequent. The last time I was there I got a geocache in the parking lot and never went into the store! Anyway, they were having a major sale on all things for the garden including their wind chimes. I ignored them as I was on a mission. Reaching for a solar light I happened to bump one. It made a melodious and altogether beautiful sound. I noticed that there were several large ones. The sign said 40 – 60% off all wind chimes. Steeling myself for disappointment, I looked at the price tag. I nearly fainted! The largest one there was marked $25.99 (regular priced). I hazarded to look at one that not only had chimes but also a spinning feature of birds. It was so lovely and my heart really wanted to snatch it up but we are in austerity mode since the house is going to be painted. I didn’t buy it.

After I returned home, I mentioned to Sparky that there was a wind chime that I liked that was also on sale. Of course they also had solar lights…. After dinner we zipped over to this store and looked at the lights. They were not going to work for what we intended. BUT Sparky looked and listened to the chimes. He was impressed with the sound. He was even more impressed with the price and decided to purchase them. The original price was $16.99 and after taxes it came to a paltry $10.67 which was such a steal! I got them home and hung them up right away. They’ve been serenading us since. And even the neighbors commented on how nice they sound and how pretty they look! 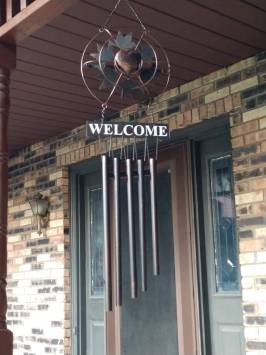 57 thoughts on “Looking at Musical Sounds”