Everyone’s selling, it’s understood
That a profit margin is deemed good
A desirable product at reasonable cost
Flood the market and all is lost
We create demand by choking supply
Advertise it so people will buy
They line up to purchase the few in stock
When they run out the doors they’ll lock
A hew and a cry and a riot or two
For a must have item I’ll eschew
Wait until supply exceeds demand
Then buy on sale or an off brand

For me it was the Cabbage Patch Kids that were the hot item that caused people to lose their minds. That was the first product that entered my vision as a strange fad and dangerous consumer anarchy. I was married that year and fortunately had no interest in that doll. People were trampled. People would camp out so that they could be the first inside when the doors were finally unlocked. The consumer became unhinged. Several years later it was Tickle Me Elmo, then the Furby and then Beanie Babies. I was at the Goodwill and happened to stroll down the toy aisle. They had a big bin filled with former must have Barbie® dolls. Their hair was a mess and most had lost their clothes. These were toys that had been played with and had been out grown and were now waiting for a new child. 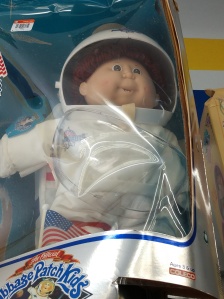 Spied at Goodwill
This brings me back to Cabbage Patch Kids. I remember a woman at the clinic I worked at, who clawed her way to one of the dolls, managed to purchase it, and get to the safety of her car. She ended up with a black eye. But she was so happy to have scored one of those dolls. She didn’t have any kids. She wanted it for herself – as a “collectable” and as an investment. Every once in awhile I see one at a garage sale. Some are filthy and look like they’ve been dragged to hell and back. Others are pristine, still in the original box. I just shake my head and think – nah, not worth it.

37 thoughts on “Looking to Consume”