We left the frozen tundra of Northern Indiana in heavy, near whiteout conditions. The roads were not plowed and the going was very slow (about a top speed of 40 MPH). What would have taken us about 3 hours to get to Indianapolis took us nearly 5 hours. We were exhausted by the time we reached clear pavement. It really takes it out of you when you have tensed all your muscles and gritted your teeth for that long. I think I strained an eye muscle and maybe the little muscles that cause the nostrils to flare. But we made it. And then we geocached the rest of the way to Florida. We brought saintvi along since she hadn’t found any caches in a couple of the states we were passing through as well as the destination. 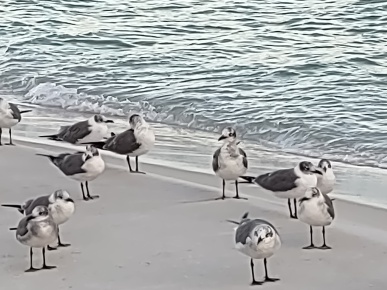 From that point things seemed wonderful. The weather was not exactly warm (high of only 50F) but sunny and much warmer than home where the highs were in negative numbers. The second day we were there saintvi got violently ill with some sort of 24 hour stomach bug. She felt bad – bad that she was so sick, bad that she was putting a damper on the fun. Then she felt better but my BIL got it. He felt awful (vomiting is no fun and then the diarrhea hit) and she felt even worse! Then my sister got it! It was hitting every 2 days. Sparky and I looked at each other. We were scheduled to drive back and it was likely that one or both of us would be very very ill on day one or two of the drive (my sister provided a cute sand bucket and plastic bags just in case). We crossed our fingers and left Florida for the drive home. It was fairly warm until we neared Indiana but I missed my sister’s hot tub (which was so delightful). Anyway, we managed to geocache and no one got sick.

As we were nearing home my sister sent a text with a news link – seems the omicron variant of the coronavirus is causing symptoms that can’t be differentiated from a stomach virus! When we looked at our vaccination status, we are in the sweet spot of still high immunity but saintvi was past that point. We discussed it and if it was COVID at least she (and my sister and BIL) are now swimming in antibodies! I’m planning on returning soon for another go round. We’ll have to hope the next visit isn’t plagued with any illnesses!